DALLAS, June 11, 2019 /PRNewswire/ -- Texas Instruments (TI) (NASDAQ: TXN) today introduced an automotive system basis chip that is the industry’s first to integrate a controller and transceiver for Controller Area Network with Flexible Data Rate (CAN FD). Designed to meet the high-bandwidth and data-rate flexibility needs of in-vehicle networks, the TCAN4550-Q1 uses the Serial Peripheral Interface (SPI) bus of almost any microcontroller to implement, with minimal hardware changes, a CAN FD interface or increase the amount of CAN FD bus ports in a system. 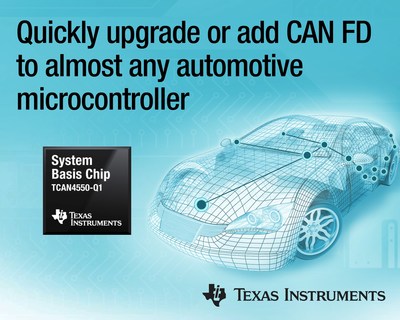 Previously, designers had to incorporate multiple discrete components into their designs or change microcontrollers entirely when upgrading to or expanding CAN FD functionality – an often time-consuming and expensive process. With the TCAN4550-Q1 system basis chip (SBC), designers can maintain their existing microcontroller-based architecture and streamline CAN FD upgrade or expansion in body electronics and lighting, advanced driver assistance systems (ADAS) and automotive gateway designs. For product details, see www.ti.com/TCAN4550-Q1-pr.

What is CAN FD?
The CAN FD communications protocol builds on the original CAN bus standard (also known as "Classical CAN") to help ensure that automotive microcontrollers and connected systems can communicate effectively as the variety and speed of data rates throughout in-vehicle networks continue to evolve. With support for data rates up to 5 Mbps and payloads up to 64 bytes, the CAN FD protocol empowers designers to move data faster in their next-generation automotive applications.

Save space while increasing system performance
This new device joins TI’s growing portfolio of SBCs that integrate CAN FD, CAN, and Local Interconnect Network (LIN) transceivers and power components into single-chip solutions, including the TCAN4550-Q1 and TLIN1441-Q1. These highly integrated devices help designers reduce their BOM, increase system performance and get their designs to market faster, as compared to competing devices with fewer integrated components. Designers can also pair TI SBCs with TI C2000™ microcontrollers to quickly and easily expand the amount of available bus ports while increasing overall system functionality.

Tools and support to speed design

Package, availability and pricing
The TCAN4550-Q1 is available now through the TI store and authorized distributors. The TCAN4550-Q1 comes in a 4.5-mm-by-3.5-mm very thin quad flat no-lead package and is priced at US$1.79 in 1,000-unit quantities.

Trademarks
C2000 and TI E2E are trademarks of Texas Instruments. All registered trademarks and other trademarks belong to their respective owners.