For Charles “Bob” Cook, a project assigned by Jack Kilby led to the development of the first integrated circuits to ever orbit the Earth – and a foundation for future space electronics

Jack Kilby was a little more than two years removed from inventing the integrated circuit (IC) when he was promoted to lead the fledgling semiconductor lab at our company. The year was 1961. He was working on three high-profile contracts – and all were having issues.

He was entrusted with making custom ICs for the Minuteman missile guidance system and ICs for a U.S. Air Force computer system. The third project was a particularly challenging request from NASA – and Jack knew exactly who he wanted to lead the project.

Charles “Bob” Cook was a young but brilliant engineer who had a knack for trouble-shooting semiconductors. Jack hand-picked Bob to be the lead engineer for the NASA project – and his decision would change space exploration for generations to come.

“I thought I could do it because when I looked at the challenge, it looked possible mathematically,” Bob said.

Shooting for the moon

NASA had its sights set on the moon with its pending manned Apollo missions. To be successful, it would need to increase the computing power and reduce the weight of its modules. As a result, the space agency was already in the process of swapping circuits of discrete transistors for integrated circuits. Jack previously supplied NASA with our first commercially available IC – the TI SN502 – at a cost of about $450. But NASA needed an alternative that provided more power and more speed in the same amount of space. 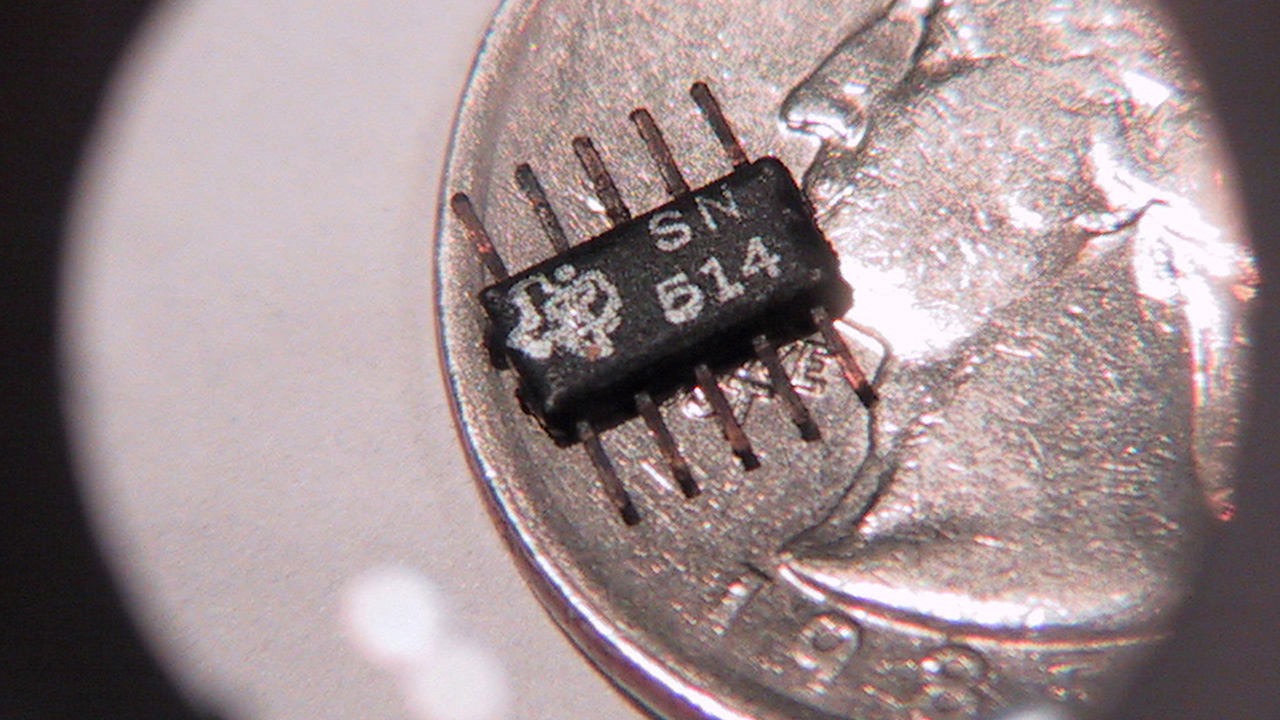 Jack’s challenge: design a line of digital logic ICs to replace the SN502, but with 10 times the speed and one-tenth the power requirements to help NASA reach its goal of increased computer power and reduced weight. And NASA wanted it in 10 months.

Learn how our company’s people and products helped land a man on the moon.

The IC business was on shaky ground. While many thought it was a great idea, the integrated circuit also had its critics early on. Manufacturing yields were remarkably low and the business challenges created a giant hurdle to mass production. But Patrick Haggerty, one of TI’s co-founders, and Jack thought it could be done.

“At that time, the majority of our business was defense contracts, and they all wanted smaller and lighter devices,” said Max Post, a TI retiree who was working in corporate at the time. “Haggerty believed very strongly in the IC and believed it would work. It was the IC that proved to be the most important development to reduce the size and weight of those systems.”

Laying the foundation for future advancements

Bob worked sunrise to sunset six days a week – plus after church on Sundays – to meet the deadline. He went to the production line and selected each wafer carefully to get the best possible yield. About 50% of the chips worked, so he examined the rejects individually with tweezers to figure out what adjustments would improve the yield.

“We did two things we had never done before,” said Bob, now 88 years old and living in West Palm Beach, Fla. “We found a way to put two transistors on a chip and we put oxide on the surface of the silicon to allow us to put conductors on it to connect the transistors.”

With that, the Series 51 family of integrated circuits was born. 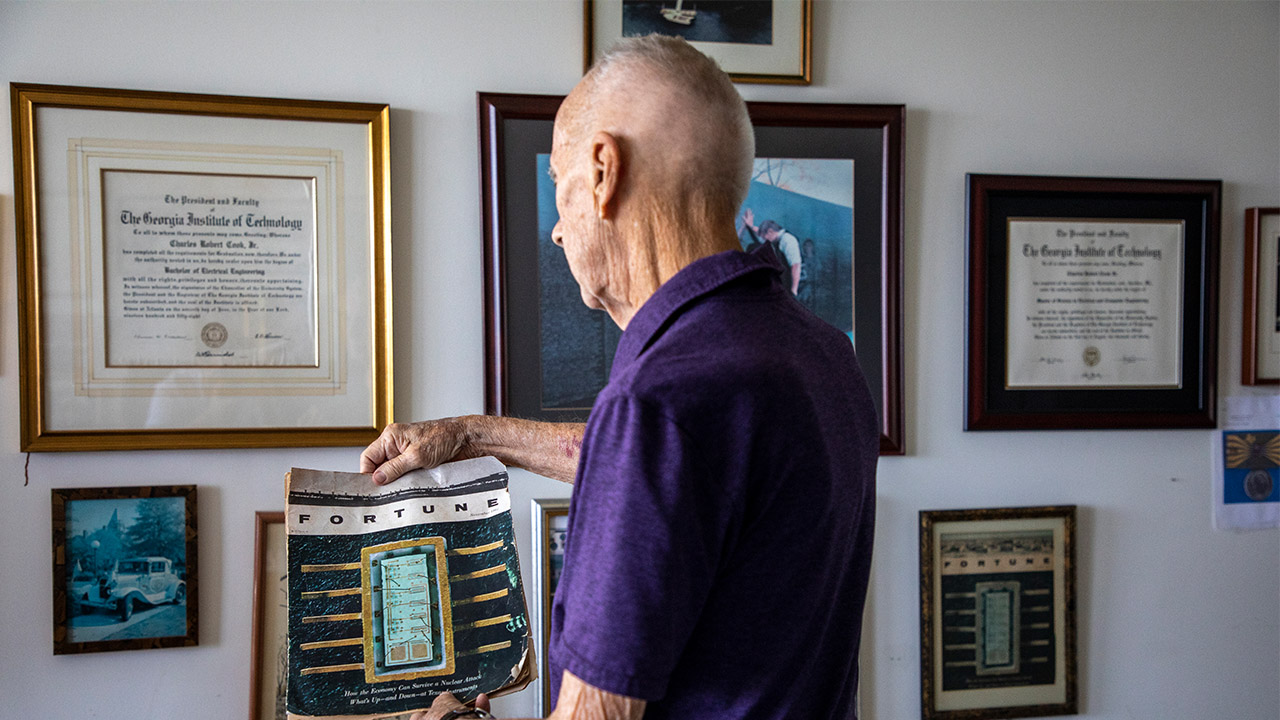 Bob Cook holds the November 1961 issue of Fortune Magazine with a Series 51 chip on the cover.

Series 51 – also featured on the November 1961 cover of Fortune magazine – was a set of six digital logic circuits based on resistor-capacitor-transistor technology with lower power and a small, flat package. Our company now had its first complete, compatible logic set that served as the basis for modern computing and introduced the term “Series.” Within a span of roughly three years, the Series 51, 52, 53 and 54 brand names quickly gained recognition across the industry. The SN5400, a military-grade four-channel, two-input NAND gate used in defense radios, is still available today.

“I told Jack that we can put a lot more stuff on the chip and then rig it so it will be useful for a lot of other applications,” Bob said. “The other two contracts eventually shifted to the Series 51 process and that turned their projects around. We were able to bail him out of all three of his headaches because of the device we made.”

The work done on Series 51 laid the foundation for several products that our company sells today and ultimately was a precursor to all IC technology that enables our increasingly digital world.

“It’s safe to say that probably 99% of applications we interact with today – from inexpensive children’s toys to appliances to personal electronics to factory automation and control – have some sort of logic gate in them,” said Michael Shultis, a marketing and applications manager for logic products at our company. “Because of what was done with the Series 51 and eventually the Series 54, today’s logic semiconductor market has exploded.”

‘I was just doing my job’

Shortly after Thanksgiving 1963, and with little fanfare, NASA launched Explorer 18, the first satellite of the Interplanetary Monitoring Platform. The satellite collected data about radiation in space to support the upcoming Apollo missions. 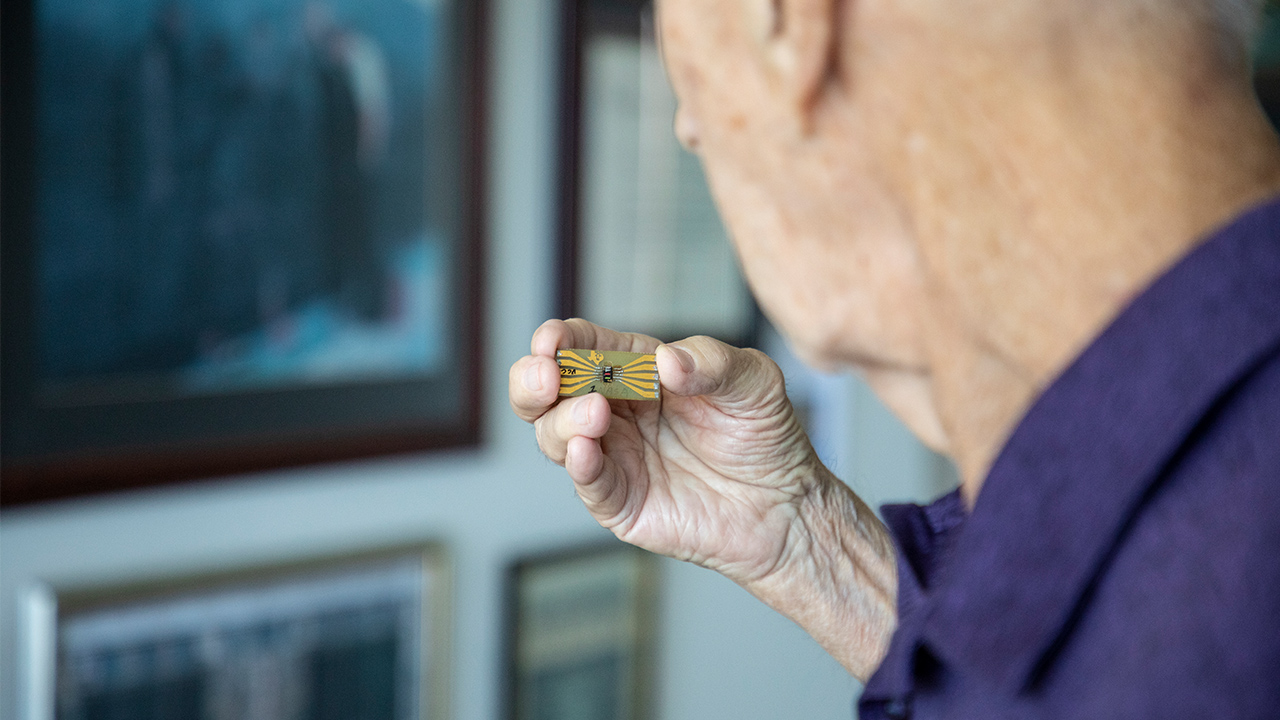 Bob Cook holds the SN502 that Jack Kilby gave to him as a thank you for his work on Series 51.

On the surface, the launch seemed ordinary. But for the future of space electronics, it was extraordinary: At the heart of the onboard Optical Aspect Computer was a pair of Series 51 ICs designed by Bob and his team at our company – the SN510 and the SN514 – and they were the first ICs to orbit the Earth.“I didn’t know it at the time, but I thought it could happen because of who had them,” Bob said, recalling that he had no knowledge that his ICs would be the first into space. “I never knew what systems my work was going into. I was just doing my job.”

Bob left TI shortly before Explorer 18 launched. He put together a remarkable 45-year career, retiring in 2002 from Siemens. He holds 22 patents, including one for airbag sensors before airbags became standard in automobiles. When NASA received the Series 51, they sent Jack’s original microchip – the SN502 – back to TI. Jack gave it to Bob as a “thank you” for his work. Bob still has it.

“I’ve had a good life and was productive in original thought all the way through my career,” Bob said. “At TI, I learned to troubleshoot semiconductors, which is at the heart of what I did the rest of my career. I was blessed with a talent, and I was given an opportunity to use it. Jack and I were very close and we did a lot of good things. Working with him was one of the highlights of my career.”

In the fall of 1958, Charles “Bob” Cook, then a 26-year-old graduate student at Georgia Tech, answered a job ad in a publication of the Institute of Radio Engineers, now known as the Institute of Electrical and Electronics Engineers. TI was looking for master’s degree graduates to do applications work.

A few weeks later, Bob was on campus for an intensive two-day interview. During his conversations, he showed the interviewers his thesis work, which focused on a three-phase modulator for an electric motor using 42 transistors. The committee was so impressed by his original work that they bypassed company policy of only hiring candidates with advanced degrees and made him an offer on the spot.

“I didn’t have my thesis polished up and finished, but I had enough so they understood what my project was,” Bob said. “They told me I was already doing master’s level work, and they made me an offer and wanted me to get there as quickly as I could.”

He never actually finished his thesis. When he initially submitted it before starting at TI, the Georgia Tech English department rejected it because of grammatical and spelling errors. Nevertheless, Bob carved out a remarkable 45-year engineering career, retiring from Siemens in 2002. 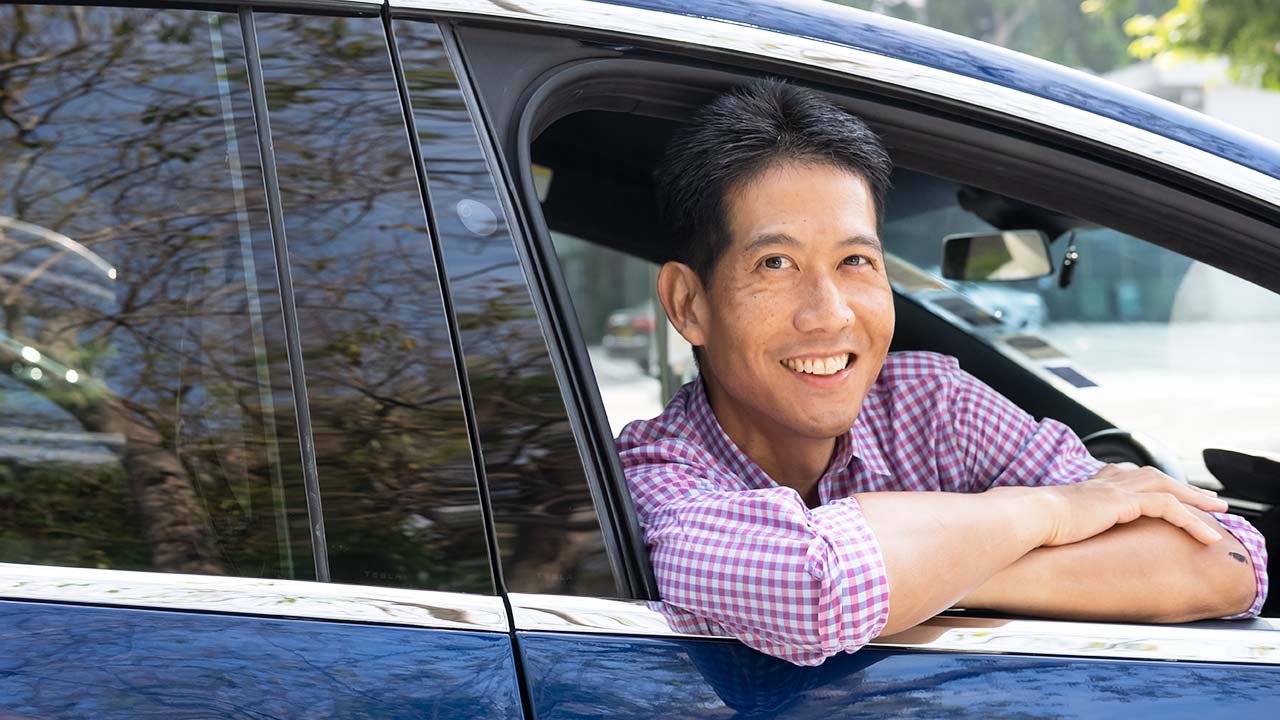 5 reasons EVs are here to stay 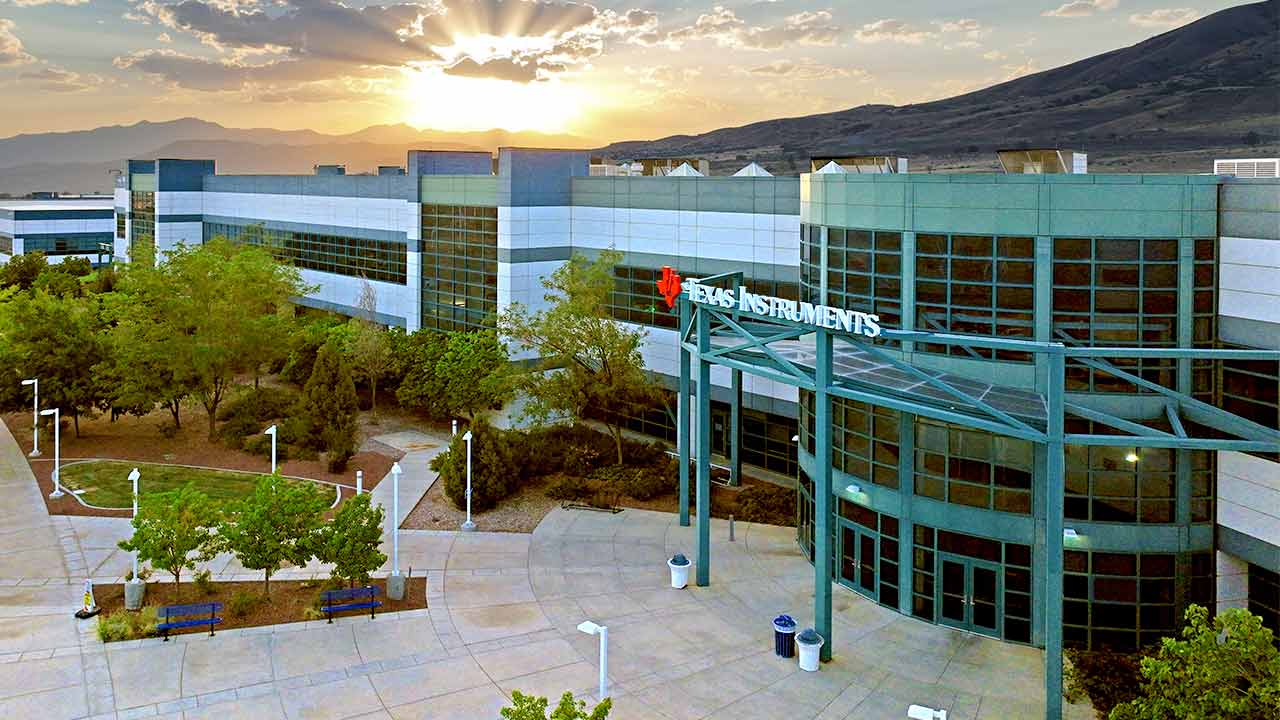